Reiff has a certain ambiguity, on one hand it has all the charm and character of an isolated Highland hamlet, on the other it is within 5 to 10 minutes of shops, a pub and boat trips to the Summer Isles.

The Scotsman published the following description of Reiff in 1960:

“Reiff is at the end of a lovely road to nowhere. With its crumbling sheilings, its emerald green machair, and its shingly little bay facing the Hebrides, it is a sad, haunted, romantic place. The land seems laden with sweet music, the wind sings, the sea sings and even the mountains seem to sing.”

The cottage itself is adjacent to a sandy cove with breathtaking views of the inner and outer Hebrides, the Torridon and Dundonnel mountain ranges and the beautiful archipelago of the Summer Isles.

The area is suitable for a multitude of outdoor pursuits, walkers will enjoy the stunning cliff walks within the vicinity of the cottage: Inverpoly Nature Reserve, home to the majestic mountains Stac Pollaidh; The Spear; and the wide expanse of golden sand at Achnahaird where aeroplanes landed during the last world war; sea angling and bird watching or simply relaxing. Recently spotted near The Haven were dolphins, otters, and a stoat! 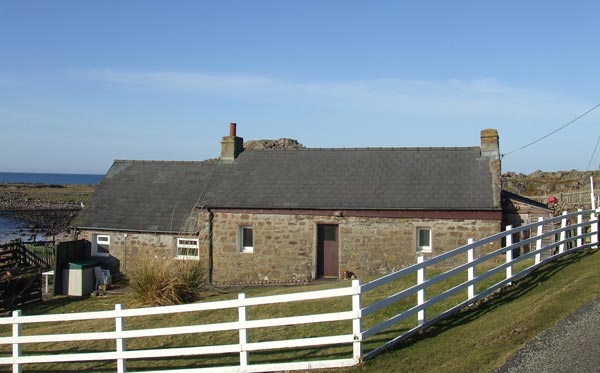 “The Haven” is a traditional Highland Black House built over 200 years ago and has been occupied by the Maclean family since that time and our grandmother, Catherine Maclean, known to all as Kate Coigach, was part of the last generation of Macleans to live here.

Her brother Murdo, who was the local shoemaker and widely known by his Gaelic nickname of Murdie Greasaich (shoemaker), continued to live in the house until the late 1960’s and to maintain the thatched roof until he was no longer able to do so physically. It was known that weapons were hidden in the thatch and rafters of the roof at the time of the 1745 rebellion and when the thatch roof was eventually removed the wooden poles, which formed the rafters, were so well ‘preserved’ with the peat smoke of generations that they would not burn. On one occasion in the early 1960’s the Queen Mother visited Reiff during a trip ashore from the customary Western Highlands & Islands summer cruise on the Royal Yacht Britannia and she urged Murdie to continue thatching the house for as long as he was able; an exhortation which he was proud to maintain!